“Resiliency is not a luxury anymore—it’s a necessity.” This statement by Oleg Kostin, Director of Operations at New Jersey American Water, was echoed throughout the Resilient Water Systems in the Face of a Changing Climate workshop at the 2021 Jersey Water Works conference. In September 2021, the remnants of Hurricane Ida barreled through New Jersey, serving as a brutal reminder that climate change is already here and the consequences will only get worse. Speakers described the resulting damage to the drinking water and wastewater systems that are critical to public health and offered innovative solutions for fortifying them against the threats of severe flooding and—in some cases—sea level rise. In addition to the technical solutions, speakers also discussed the importance of planning and communication.

Jim Cosgrove, Vice President and Principal at Kleinfelder, set the scene by showing jarring images of flooded facilities at various water utilities as a result of Tropical Storm Ida. He highlighted one wastewater treatment plant that had a flood wall design ready to go, but was completely exposed to Ida’s floodwaters because the land use permits for the wall took an entire year and a half to be approved. One of several recommendations Cosgrove listed was to figure out “a way for regulatory agencies and the regulated community to work together better to be able to fast-track resiliency projects.” 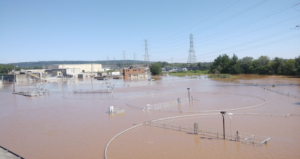 View of the completely inundated treatment plant at the Somerset Raritan Valley Sewerage Authority (SRVSA) on Sept. 2, 2021, the day after Tropical Storm Ida came through.

Hector Herrera, Borough Administrator for the Borough of Bound Brook, showed drone footage of the intense flooding his municipality experienced that was caused by a backup at a pumping station owned by a regional wastewater authority. He noted that there was a lack of sufficient communication with the regional authority both before and during the storm, which left the Borough unprepared for the problem. In reflecting on the lessons learned, Herrera said, “It’s really important for me and for everyone to be able to have that open line of communication with our partners, especially when a big event like [Ida] is going to happen, and to identify where [the] potential problem areas are.”

Representatives from three water utilities—one along the Delaware River, one along the coast, and one with a low-lying treatment plant near the confluence of the Raritan and Millstone rivers—shared examples of what it looks like to invest in climate resilience for their treatment plants. 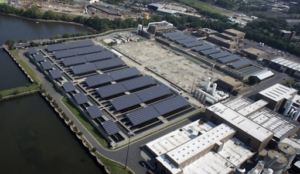 Scott Schreiber, Executive Director of the Camden County Municipal Utilities Authority (CCMUA), explained how the utility is “working really hard to reduce its carbon footprint” by expanding its ability to produce renewable energy onsite, “while also ensuring that it can continue to run even during a natural disaster” by expanding the plant’s capacity to receive more combined sewage flows during heavy rains. 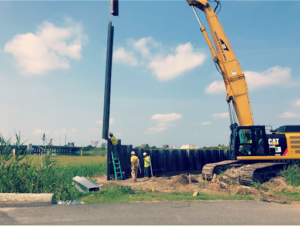 Rick Dovey, President of the Atlantic County Utilities Authority (ACUA), shared that the ACUA has the same energy goals as the CCMUA and described a $3.7 million investment in a sea wall surrounding the low-lying areas of its facility after the floodwaters of Hurricane Sandy in 2012 nearly compromised its wastewater process. 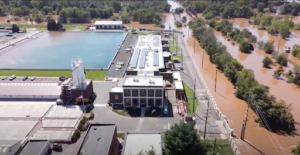 Similarly, following inundation from Hurricane Floyd in 1999, New Jersey American Water built a flood wall around its Raritan-Millstone plant and underwent a $32 million expansion following Hurricane Irene in 2011. As Kostin showed drone footage of Ida’s flood waters coming right up to the flood wall, he noted that “had that flood wall not been there, there would have been well in excess of $32 million worth of damage, not to mention the disruption to the local economy and the populace.”

Each water utility will need a customized approach based on a variety of factors, including its system size, geography, and flood risk. To formulate this approach, water utilities can utilize comprehensive planning resources, such as the climate-related risks and opportunities framework that Alua Suleimenova from WSP presented (learn more here). This tool helps map climate exposure and climate information needs across various business functions at the utility, especially those that are not as directly concerned with climate change impacts, such as HR, operations, and finance.

The session’s expert panelists imparted the clear message that the time is now to invest in building resilience into both new designs and existing facilities, and that these strategies will not only safeguard our communities from the threats of climate change, but help utilities avoid the ever-growing cost of damages as well. During the panel discussion, Cosgrove reinforced the point that “the most critical change [for utilities] is recognizing that resilience is going to have to be built in.” In terms of the importance of communication, Dovey added, “We have to learn how to communicate and articulate why these expenses and projects need to be implemented. We have the public’s trust, and they expect us to protect their well-being—their health and safety.”

You can view the workshop here.